If you believe you have Coronavirus (COVID-19), or have developed a continuous cough, have a fever/high temperature, loss of smell or taste, or have come into contact in the last 14 days with someone who has; then please do NOT come into Sandyford. For further information about Coronavirus please visit NHS Inform.

Children need us to prepare them for the changes puberty before it happens to them.

What starts puberty off?

The onset of puberty is triggered my genetic and environmental factors. The strongest genetic link is between mothers and daughters – daughters are more likely to start puberty at the same age their mother did than sons are with their fathers. Environmentally, puberty is triggered by body mass, which would partly explain why children are starting puberty younger – this generation compared with those in the 1960’s are generally better fed and heavier at a younger age.

Puberty begins when an area of the brain called the hypothalamus starts to release gonadotropin releasing hormone (GnRH). When GnRH travels to the pituitary gland (a small gland under the brain that produces hormones that control other glands throughout the body), it releases two more puberty hormones – luteinising hormone (LH) and follicle stimulating hormone (FSH).

What changes happen to both boys and girls?

For younger children, a fun way to talk through the changes can be using a ‘bodymap’. Using a roll of lining paper, draw round your child and, together, draw or right on the body outline the changes that will happen. Here’s an example of one : 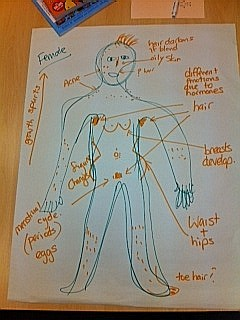 We have a great booklet about puberty and growing up.